What is digital signature ?

Digital signature is a method of proving the authenticity of a digital message or document. It is commonly used in electronic transactions to prove the identity of the sender. It also ensures that the message was not tampered with during transmission.

Digital signature uses mathematical schemes to prove someone’s ownership of some data using his private key- think of it as a cryptographic thumbprint.

In order to achieve this digital signatures are implemented using public-key cryptography.

How does Digital signature compare to paper signature ?

The biggest difference between a digital and a handwritten signature is trust. When you write a signature on paper, nobody is in a position to trust it but you. By this we mean that the person in question have no way to prove that you are the actual owner of the signature.

But when you use digital signing, anybody can virtually check the validity of the signature and the integrity of the signed document.

What is digital signature used for ?

They become a standard element for ID documents among many governmental institutions.

From a user’s point of view, the most important use of digital signatures is authentication: proving your identity to others.

Since digitally signed document are know recognized by many countries, governments use them more and more in online administrative services.

Note. In some countries the regulation process is still in progress or nonexistent. You should check the legal status in your country before assuming that it accepts digitally signed document in administrative applications.

Let’s suppose that Bob wants to send a digitally signed document to Alice. Bob has a set of two keys : private key and a public key, also called key pair.

The key-pair is usually distributed and stored in the form of a digital certificate.

A private key always remain private. But in order to digitally sign a document for Alice, Bob needs to share his public key with her.

She will need it later on to verify the authenticity of the document and the signature.

Below are simplified steps of how the signing procedure is achieved : 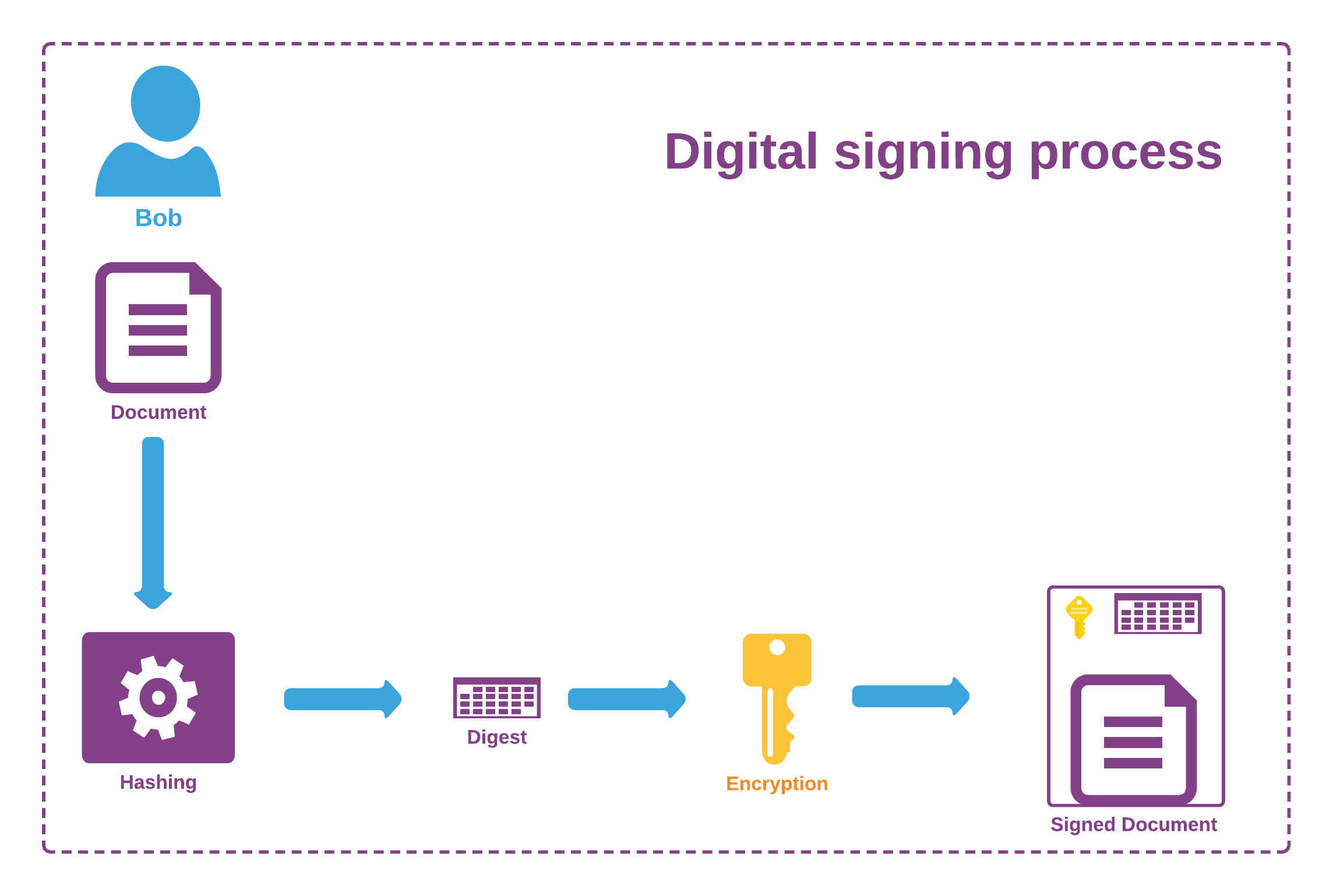 Any variation in the content of the document or in Bob’s private key would result in a different digest. So Alice can use the document and its digital signature to reverse the process and verify its legitimacy.

The process of verification is as follows :

Note. The encryption process that uses public/private key pairs is called asymmetric cryptography. We’ll get to it later but for now all you need to know is that it’s an algorithm where the private key is only used to encrypt data, and public key only used to decrypt it.

How to obtain a public/private key pair ?

Some free software allow anyone to generate keys or certificates locally. While those can be used in some cases, they are not accepted by legal or governmental institutions.

Certificate authorities (CA) are the third party entities that guarantee the authenticity of distributed keys and bind them to their owner’s real identity. They are attached to a Root certificate authority which are recognized by most information systems.

Some countries like Estonia and Italy already started a large process of digital IDs distribution. Those modern ID cards integrate a certificate by default for every citizen.

Estonia went further by allowing anyone in the world to apply for e-residency. If your application is accepted, you get a digital ID card with a certificate ready to use for signature.

Daily internet transactions need trust and security, and digital signature is the most important element to enforce data integrity in most web transactions.

Additionally, many governments are adopting digital identity as a modern way to facilitate administrative procedures.